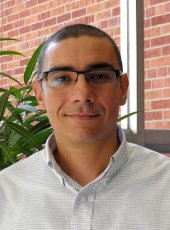 Prof. El-Ganainy (Google Scholar) obtained his BSc in electronics and communication engineering and MSc in microwave engineering from Cairo University in 1999 and 2003, respectively. From 2001 till 2003 he was a research assistant at the Electronics Research Institute, Cairo, Egypt and in 2004 he was a researcher at Chalmers University of Technology in Sweden. He obtained his Masters and PhD degrees in Optics and Photonics from CREOL, University of Central Florida in 2007 and 2009, correspondingly.
Between 2009 and 2013, he was postdoctoral research fellow at the Department of Physics, University of Toronto, Canada and in 2013 he was a guest scientist at the Max Planck Institute for the Physics of Complex Systems, Germany. He is currently an Assistant Professor at Department of Physics, Michigan Technological University where he is also a member of the Henes Center for Quantum Phenomena.